Language
Your are here : Home > Project > Case Study > The Construction and Operation of Nuclear Power Plant

The Construction and Operation of Nuclear Power Plant

With the lack of fossil fuel and aggravation of pollution, nuclear power is the unique new power can be Large-scale applied with great prospect. Nuclear power plant only needs to consume a little nuclear fuel and produce a large amount of electrical energy by using much less cost than thermal power station. Another advantage of nuclear power is clean, non-polluted, almost zero emission with a good prospect in China. Liaoning Hongyanhe Nuclear Power Plant is located in Donggang town of Wafangdian City, Liaodong Bay of Bohai Sea in the East. There are three sides surrounded by the sea. It is located on the two level marine terraces. It is the first nuclear power project approved by government during the 11th Five-Year Plan period. Besides, it is also the first nuclear power plant in the northeast that four a-million-kilowatt nuclear power units can be standardized and normalized. In June 2006, the first phase of the nuclear island project officially started. No.1 and No. 2 units’ excavation site of nuclear island foundation passed the inspection of National Nuclear Security Administration. Unit No.1 officially started in September 2007 and put into commercial operation in 2012. After the completion of the project, the daily generating capacity reaches 9600 kwh and the annual profit and tax are about 6 billion yuan. 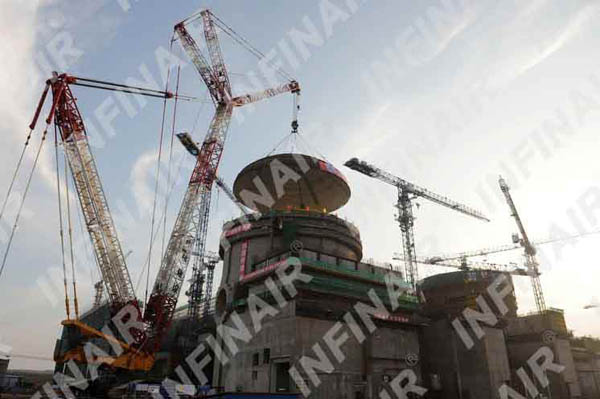 (1). The nuclear power plant needs a large number of cooling water to keep working. So Hongyanhe Nuclear Power Plant is located in the east side of Liaodong Bay of Bohai Sea. And there are three sides surrounded by the sea. The oceanic climate condition asks extremely strict requirements for corrosion protection of power plant equipment.

Because of the high concentration of CL-, the rain has been acidic with strong corrosive. The effect of corrosion on the ventilation is not only the appearance. For example, if a tiny rivet is corded on the wind impeller, it may make the whole impeller fly apart in the process of high-speed operation and even cause deadly damage to the ventilation system. Therefore, the nuclear power plant has strict requirements to the ventilation equipment’s imputrescibility.

(1) For the corrosion problem of nuclear power plants, we adopt anti-corrosion structure design:

b. We allowed for corrosion loss and appropriately thicken the plate such as wind turbine impeller parts etc.

d. We adopt the structure that is easy to be replaced. Our products should be ensured that the bolt connection structure is used to replace the welding and riveting structure.

e. To the important structure, we have the corresponding detection and protection measures. For example, we design the observation window or overhaul gate on the shell and install protective nets on the equipment

f. We adopt the corrosion-resistant materials. The main body uses stainless steel, glass steel instead of carbon steel. It is much better that we use the anti-corrosion spare parts like nickel plated, stainless steel 316 (or 304) material, etc. We adopt surface spraying method, do good surface treatment before coating and improve the adhesion of the coating. We use high performance coatings such as nuclear power plant and nuclear power plant special epoxy primer epoxy paint.

(2). Ventilation’s Structural Stability:
Lacking of rigidity of frame steel structure and link easily leads to vibration. So all the INFINAIR ventilations will strengthen the base component, such as increasing the angle and number of holes. The ventilation will go through the fluid analysis and structural strength analysis to ensure the structure strength before designing. 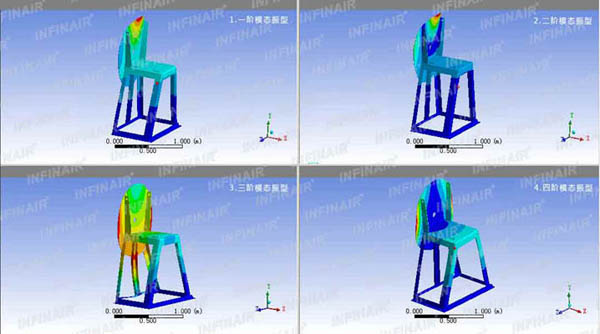 3. The feedback of customers